The Women Behind Anna Nitschmann House

Anna Nitschmann House, a dorm on Moravian College's Main Street Campus, is one of many College buildings with a historic name. But what's the story behind the name? 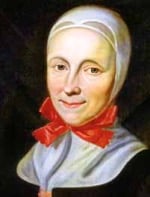 The name belongs to a Lusatian woman who lived in the eighteenth century: Anna Caritas Nitschmann, a Moravian Brethern missionary and wife to Nicolaus Ludwig Zinzendorf (who also has a building on campus named after him). Here are 5 interesting facts about Anna Nitschmann:

1. While Anna was growing up, her father and brother were put in jail for practicing Christianity.

In 1725 the family escaped to the growing Moravian community in Herrnhut, Germany.

2. At the age of 14, Anna was selected as the Chief Eldress of the Renewed Moravian Church.

She became a spiritual mentor and counselor to female congregation members.

Her works were published in the Moravians’ hymnal.

4. Anna signed up for the Pilgrim Congregation to spread Christianity to new settlements around the globe.

She traveled the world and was a part of the mission that founded Bethlehem and Nazareth.

5. After the death of his first wife, Count Nicholas von Zinzendorf, a noble, asked Anna, a commoner, to marry him.

All classes were equal in the Moravian community, and Anna was married to Count Zinzendorf on June 27, 1757 at the age of 41. She is buried in Herrnhut, Germany, near her husband and his first wife.

The Moravian Missionary behind zinzendorf hall