Our final day in Oregon was upon us, so we decided to take one last trip before leaving for the airport in the afternoon. Knute, who's been a sailor for about 45 years, captained our ship out to sea as we searched for very small organisms and sand dollars.

Many of us have some form of motion sickness, myself included. As soon as we left Coos Bay and reached the Pacific Ocean, that was when the rocking of the ocean’s waves really hit most of us.

As we started into open water, we threw a smaller towing net into the ocean to catch phytoplankton and other organisms. Among these, was an arthropod called a copepod. These creatures are related to shrimp and feed on the phytoplankton. They are also the most abundant consumer in the ocean. 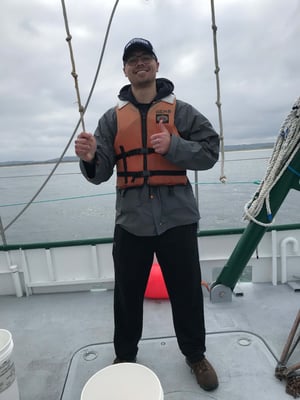 Even though many of us had become sick on the trip, it was so much fun because of the hundreds of sand dollars we caught (they were released back into the ocean). But at the end of the day we had to pack up our bags and head to the airport.

As I sat in the airport waiting to board our flight back to Newark, I pondered about my experiences in Oregon with the rest of my class. I knew a few of my classmates before the trip, but not too well. This trip changed everything; we all became a family.

We grew closer through our trips to Davey Jones’ Locker (a little convenience store), watching a few ocean-based movies (especially Deep Blue Sea), and helping each other in the field. We all have different backgrounds and personalities, but two things really facilitated our cohesion. These two things were our humor and our love of finding new creatures in the field.

The one creature I really would have liked to take home as a pet was a nudibranch, more commonly known as a sea slug. This was a class favorite, and I'm sure many of my classmates would have wanted to take one home as well. Unfortunately, TSA would definitely not let that slide.

Now it may seem that this trip was just for fun, but I learned probably a full semester’s worth of information in just two weeks. One may ask, “How is that possible?” Well, it was very possible because when we would step into the field sites, there were so many species to be found. The hands-on experience and Dr. Lord’s guidance and teaching while in the field was what ensured that a semester’s worth of information was learned in two weeks.

Along with the worthwhile knowledge, I became a better hiker and climber through this experience. I was never much of an outdoorsman, but this trip might have just changed my mind. Overall, the experience was amazing and possibly even once in a lifetime. It provided me with an experience in a field of biology I have never studied before, and I am very grateful for the opportunity.

I want to thank Dr. Lord for offering this experience to me, as well as my fellow classmates. This trip has provided me with new friendships and even the possibility of attending medical school on the west coast. Goodbye Oregon, I hope to see you soon!