Last spring, when members of Moravian College’s Marketing Department Claire Boucher and then-graphic-designer Eleni Garzon came across a piece of embroidery depicting a building at another college campus, they looked at each other wide-eyed, “Let’s do this!” Graphic design intern Vina-Andrea Aquirre ’20 recommended fiber artist Gabriela Landi ’20 for the task. Today, after 85 hours of exquisite, intricate needlework, an embroidery hoop of Comenius Hall is ready for framing.

Landi learned needlework at her Grandmother’s side. “She lived with us in our home in Emmaus and taught me how to sew by hand when I was seven,” says Landi. “I would sit with her while she did alterations, and I would make clothes for my stuffed animals and dolls.”

In high school, Landi took up painting and crocheting and in her sophomore year at Moravian learned embroidery. “My mind thrives on detail-oriented projects,” says Landi about her passion for the craft. “I get into a flow. It’s not as absorbing as painting, where I lose track of time,” she adds. “Embroidery requires more critical thinking. It’s a puzzle. You lay in one piece and then fit in other shapes around it.”

The art of fine needlework occupies a place of prominence in the history of Moravian College. Students of the Female Seminary learned embroidery as early as 1787, paying an extra fee for classes, writes Jewel Smith in her book Music, Women, and Pianos in Antebellum Bethlehem, Pennsylvania: The Moravian Young Ladies’ Seminary. In 1826, Young Ladies’ Seminary students embroidered a memorial wreath and presented it to Louisa Catherine Adams upon the death of her father-in-law, President John Adams. An inscription in the center reads, “Presented to Mrs. Adams, Lady of the President of the United States of American by the Pupils of the Seminary for Female Education at Bethlehem, Pennsylvania, 1826.”

To create the Comenius hoop, Landi first took photos from several different perspectives and under a variety of lighting conditions. She compiled them with other photos of Comenius Hall and used them as reference to make a line drawing of the building. “I did a simple sketch—the windows, doors, and major sections—and traced it onto the fabric.” Then began the work of building Comenius Hall with needle and thread.

The stonework proved the most challenging. “It was very difficult,” says Landi. “I used four colors to create a lot of detail. I wanted it to look as accurate as possible because it’s Moravian.” But Landi had to achieve just the right balance in that detail. “If you overwork an area by adding too many stitches--building too much into the fabric--the cloth can buckle,” she explains.

Landi achieved the perfect balance. The Comenius hoop is an extraordinary work. Ask Boucher about it, and you’ll elicit a big smile. Where the finished piece will hang has yet to be determined, but you can be sure it will be somewhere for all to see. In the meantime, visit our photo gallery

To view more of Gabi’s work, visit her Instagram page. 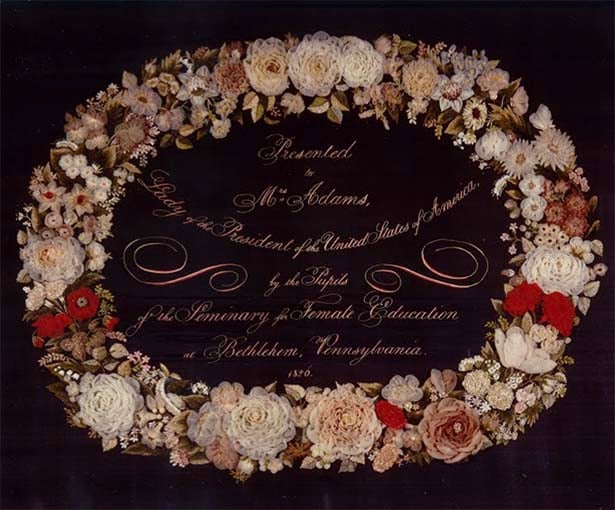 A Wreath for Mrs. Adams

In 1826, the students of Moravian College’s Seminary for Young Ladies’ embroidered a wreath and presented it to First Lady Louisa Catherine Adams after the death of her father-in-law, former President John Adams. In response, the First Lady sent the following letter:

The extreme ill health under which I have labored ever since my return to Washington has prevented the earlier acknowledgment of the receipt of the elegant specimen of workmanship so beautifully executed by the pupils of the Bethlehem Seminary and presented to me in so flattering a manner. The great interest I must ever take in the exertions of my sex to attain to excellence and perfection in the cultivation of their minds and in the acquirements of useful and elegant accomplishments, may perhaps entitle me to express my admiration of the work with which you have honored me, in which the purest taste and neatest execution are conspicuous, and return my grateful thanks for the honor thus conferred on me by the distinction so bestowed,—a sense of which is deeply impressed on my heart.

The letter is preserved along with needlework patterns and samplers from the 1790s forward, the needlework of teachers and students, inventories of supplies, and related documents in the collection of the Moravian Archives, Bethlehem, Pennsylvania.