Digging in the Mudflats

Yesterday, we started our day working on our group projects, and then we walked to the mudflats. From a distance, the mudflats do not look like much, but there has been so much to see at every site we have visited. We quickly learned that all of the holes in the mud signify life under the sand in that general area. Animals like clams and mud shrimp inhabit mudflats and were some of the key species we set out to look for and later identified in the lab. Of course, other animals like worms, crabs, and sea slugs were found in abundance at the flats. Once we arrived at the mudflat, we attempted to dig up some clams. One thing our class learned from a local on the flats is that when digging for the clams you have to dig delicately and come from the side to avoid breaking the shells. 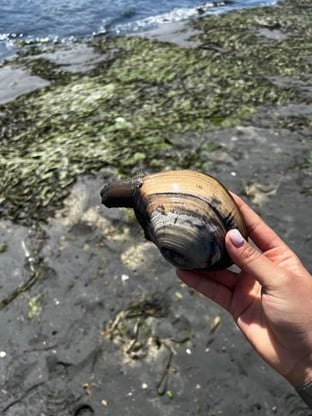 Unfortunately, we learned that the hard way and broke more clams than we left with. However, the seagulls were not complaining that we were helping them gather their lunch for the day! The gentleman said that he had just started and he was able to collect larger and more clams than our group did in the time we were out there. He could definitely tell that we were amateurs! The people around town all seem to be super nice! Dr. Lord, of course, was the one to find the biggest clam that required three of us to help dig the hole. It was interesting to see the change in the color of the sand as we dug further and further. Dr. Lord explained that the change in color was because the oxygen only goes so far down and anything beneath that in the sand relies on sulfate instead. 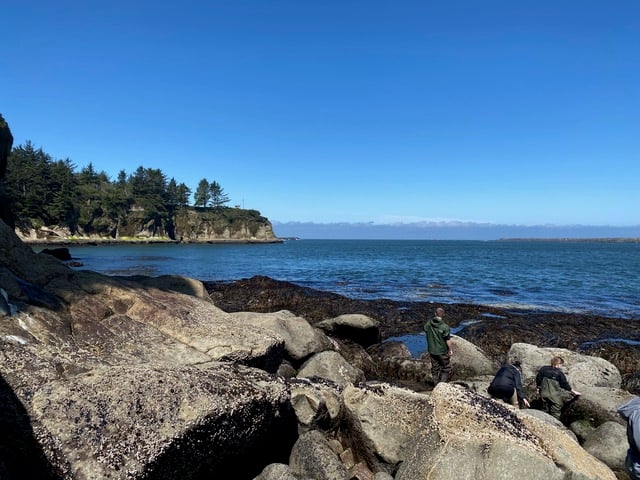 Today, we explored the beach by the OIMB boathouse which is just down the road from our cottages. It was one of the more beautiful days we’ve had here so far with a high of 55º and sunny all day. Getting down to the beach only required a small trail and climbing over some rocks. Since we have become more familiar with marine life here, it is easier to recognize and identify some of the species in the field, especially the ones we have already identified in our field guide as a class. Climbing on the rocks and maneuvering our way through the intertidal zones has been an experience in itself but something that I have enjoyed! There are lots of barnacles and mussels all over the rocks which can help for traction when walking (they don’t break very easily) but the barnacles especially are super rough on your hands when you need to hold onto the rocks or need to climb up them. We all learned really fast what kinds of seaweed are slippery and what kinds of seaweed are good to walk on! The views from our different field sites have been amazing too and the pictures never seem to do them justice!