I grew up in Prague, which was then the capital of Czechoslovakia. It is hard to judge your home if that is the only place you know. I always knew that Prague was beautiful, but only after I traveled to other capitals did I come to appreciate how unique Prague really is. It has given me pleasure to take students there to share that beauty with them.

In contrast, when growing up in such a historic city, it is impossible not to be aware of the many centuries of its history, which were central to all of Europe. For example, the Thirty Years’ War, which caused Comenius to emigrate, both started and ended in Prague. The history of the 20th century also imprinted itself on Prague, mostly by Hitler’s and then the communists’ takeover. Growing up in a communist regime makes it imperative to be aware of the political risks you take with every one of your statements because you can never be sure who might overhear you and report you to the authorities. You must compare the propaganda around you against the sources you trust; you must become your own anchor.

My parents and I left the country one year after the Soviet invasion, and I still marvel at the freedoms the United States offers.

Where did you earn your higher-ed degrees?

My father taught at Michigan State University and that is where I earned my bachelor’s degree in political philosophy. I earned my PhD in economics from Princeton University.

What drew you to your academic discipline?

Growing up in an a centrally planned economy, I could directly observe the resulting mismanagement, and I became convinced that there must a better way to organize economic activity. Czechoslovakia was extreme, even among the other so-called communist countries, in criminalizing private economic activity: hiring a person to work for you was illegal. Even in East Germany one could own a bakery and hire three employees. In Czechoslovakia, the state was the only legitimate employer.

In high school, in Michigan, I took an economics course and liked it so much I decided to become an economist. I was, of course, also fascinated by the question of what constitutes a good political regime, which is crucial for a well-functioning economy.

What are your research interests and why are you drawn to them?

After the “fall of the wall,” Czechoslovakia faced the hard problem of how to return all the nationalized property back to the initial owners and how to privatize enterprises. Unlike in the Soviet Union, this privatization process was relatively fair and successful. Another problem was how to create financial markets and institutions that are crucial for the business world. I wrote a few papers in that area. Now the Czech and Slovak Republics are successful members of the European Union. More recently, I have collaborated with my husband on several articles in sports economics about gender difference in response to competitive settings. While many studies demonstrate that women shy away from winner-take-all settings, we find that this is not true in sports.

You and your husband have made a generous gift to Moravian University in the form of a fund to support the upkeep of our trees. What motivated you to do so? 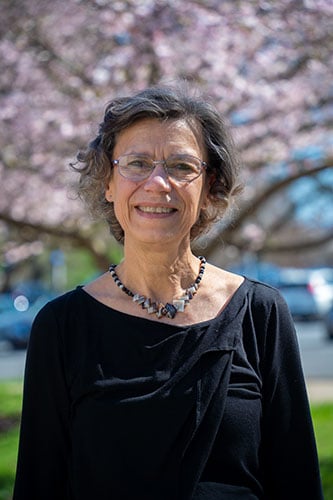 I love nature, and I marvel at the variety and size of the many trees we have here on campus. Moravian is not unique in this regard, of course, but I would like the university to be an oasis of peace and beauty for generations to come.

What do you enjoy about being a faculty member here at Moravian?

I love the degree of collegiality among the faculty and students’ genuine openness to learning.

Share something about yourself that people may not know.

My maternal grandfather was born in Moravia.

What is your favorite place on campus?

The Comenius statue because it reminds me of my homeland.

What book, film, song, or work of art do you find enduring, unforgettable?

I love Dvorak’s Symphony No. 9: “From the New World.” The “Going Home” theme is like a lullaby, but the finale of the final movement is so stirring it makes me pretend I am conducting. I love Tchaikovsky’s Marche Slave for the same reason.

What is the best advice you have ever received or a quote that stays with you?

My father told me that everyone is the creator of his destiny, and—true to his philosophy—he never checked my homework.