Today was day three of five waking up early and going into the field. Our cottage woke up at 5:30 a.m. this morning and looked forward to seeing Cape Arago’s lighthouse, especially with its extensive history as discussed prior to arriving at OIMB. Today there was a high temperature of 57 with 80% humidity and a 60% chance of rain. We opened our doors when we woke up and the air was thick but crisp, the grass was dewy, and the sky was a smoggy overcast. I definitely overdressed for our field trip to lighthouse island but with such high humidity, the rain we encountered in the field was expected. There was a lot of hidden excitement going to see lighthouse island and the history that is attached to such an important landmark in Coos Bay. 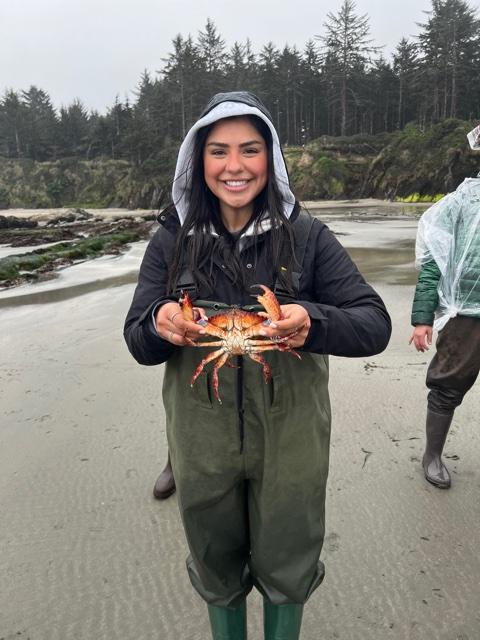 When arriving at our trail to get to the lighthouse, we noticed the multiple signs stapled to the trees which read “no trespassing,” “posted private property,” “keep out,” and “violators will be prosecuted.” The gate preventing entry was decorated with barbed wire on each row with private property gates enclosing both sides. I thought this was deceiving because of the road signage which is still up and sends you to this location and provides access to the lighthouse. It seems the town privatized a breathtaking landmark and should remove all things that advertise the site. In this course, we discussed that this lighthouse was built in 1855-1856 and the island itself is actually now closed to the public. The land is owned by the Coos, Lower Umpqua, and Siuslaw tribes and is a tribal cemetery and a site of ceremonies for them to use at their convenience.

However, being in the field today I noticed there was some rope implemented that would give access to the lighthouse to anyone who is able to bypass the illegal trails. This lighthouse is also published on the National Register of Historic Places. It is unfortunate the public no longer has access as it is one of the most photographed lighthouses located on the west coast, but is still able to be seen from other state parks and hiking trails in the area!

In the field today we used quadrads to do transecting while we conducted two experiments in the field in different parts of the intertidal zone. The tide was extremely low today, exposing an abundance of seaweed that is normally covered by the water, which made the field extremely laborious to navigate through. When calculating the percentage of items that made up the quadrads, the bulk of it was seaweed. After getting back to land, we used shovels to search for crabs in the sand and were able to capture a few. There was not much marine life in the field but the caves were cool to see as well as the on then off again bridge to the lighthouse. The mist from the ocean mixed with the rain was a warm hug as we trudged back in the sand to our van.

Overall our day was good and the weather was what you’d expect in Oregon!