Kyle Froehlich came to Moravian College intending to pursue engineering, but as often happens at a liberal arts institution, he discovered his true passion. “I bounced around a bit,” he says. “Then I took Dr. Bevington’s botany course—it was a game changer.” Froehlich graduated in 2019 with a BS in environmental science. In March of

this year, his undergraduate research with Joshua Lord, assistant professor of biology, was published online in the Journal of Experimental Marine Biology and Ecology, which will be released in print in May 2020.

Froehlich’s paper, co-authored with Lord, “Can Ocean Acidification Interfere with the Ability of Mud Snails (Tritia obsolete) to Sense Predators?” examines the effect of acidified seawater on the interaction between mud snails and their predator, the mud crab. Ocean acidification is a consequence of an increase in atmospheric carbon dioxide from greenhouse gas emissions. As emissions rise so does acidification. Other studies of marine species have shown that increased acidity of seawater interferes with the predator-prey response. Mud snails sense the approach of mud crabs through chemicals the crabs emit; then they crawl away or bury under the sand. Froehlich’s work looked at whether acidified seawater would inhibit the snails’ escape response.

“Mud snails are everywhere on the East Coast,” says Froehlich. “They are scavengers and clean up the ecosystem.” As reported in Froehlich’s paper, these invertebrates live along both coastlines of the United States in mud flats, sand flats, and salt marshes. They feed largely on algae and other organic matter found on 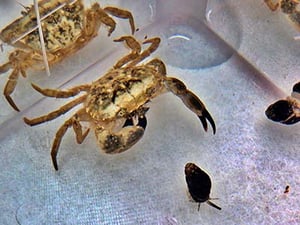 sediment, and their foraging helps recycle nutrients in their environments. Mud snails are integral to a healthy ecosystem that supports a variety of species. Interference in their ability to sense and escape predators could result in a demise in their population that would create a significant ripple effect within the ecosystem.

Froehlich gathered snails and crabs from the field and re-created their habitat in the lab under a normal pH of 8.1 and a pH of 7.6. Cut to the results: the study showed that acidification significantly diminished the snails’ escape response to their predators. “Though we observed the interference, we don’t know the exact mechanism behind it,” says Froehlich. “More research is needed.” (You can read the full paper here.)

Froehlich is currently pursuing work in environmental science at the state level and is also looking at graduate schools. “Dr. Lord and Dr. Bevington have been a significant influence,” he says, “I’d really like to become a professor and work with students.”

Education, Academics, Faculty
A Guide for Parents: Online Learning
From a Semester to a Career in Washington, D.C.
Related Posts