Glenn H. Asquith Jr. (1946–2017) was a professor of theology and a loving family man. In honor of him, his family donated a bench to the seminary, where they and Asquith’s colleagues and friends can stop and remember him.

In the garden on the west side of Bahnson Center, home to the Moravian Theological Seminary, sits a bench that faces Bahnson, framed by an arc of burning bushes. Affixed to the top of the bench is a plaque that reads:

Given in loving memory by your family

Glenn Asquith’s family describes him as reserved, contained, and yet his reach embraced a

Professor of pastoral theology and director of the master of arts in pastoral counseling (MAPC) program at the seminary, Asquith developed the first MAPC in the country, emphasizing the importance of integrating spirituality in counseling. He was instrumental also in the launch of the Formative Spirituality Program at Moravian.

During his 31 years at Moravian from 1978 to 2009, Asquith did not confine his teaching to the classroom, says Craig Atwood, Charles D. Couch Chair of Moravian Theology and director of the Center for Moravian Studies. “He often led programs in local churches and traveled to Antigua, Nicaragua, and other countries to help train pastors in counseling.”

Where Asquith’s reach was most deeply felt was within his family, who came together to donate a bench to Moravian in honor of the man and his legacy. The idea came to Shannon Asquith Stahl, Glenn’s daughter, one day as she drove past the college campus. Stahl has lived her whole life in Bethlehem. “My dad is buried in Haddonfield, New Jersey, next to his father,” she says. “We didn’t have a place for him close by.” Her mother and sister, Meredith Twardowski, gave their full support. They asked that the bench be placed in the Bahnson garden, a perfect spot because the seminary was a large part not only of Asquith’s life but of his family’s as well. His daughters remember attending potluck dinners when they were young and playing with the children of students and faculty. Some of those friendships remain close today.

“The bench offers a place where people can rest,” says Stahl. And where she and her sister and mother can reflect and reminisce.

“I was extremely close to my father,” says Twardowski. “I had so much admiration for him, and 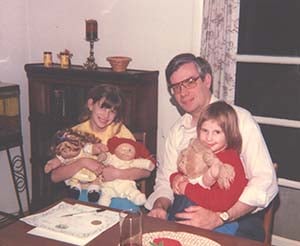 he was fun. In the summer, he would pile me and my friends into the car, and we’d go mini-golfing or swimming. My dad and I would go to the movies together. Sometimes we would eat Ritz crackers and peanut butter and have conversations about the world.”

And there were the infamous cookies, a special Asquith recipe that he and his daughters would make every year at Christmas time for the open house the family hosted for the seminary students.

Asquith cooked up pizzas with dough he made from scratch and could toss in the air as well as any pizzeria chef, says Twardowski, who captured one of those throws in a photograph.

“When I was very young, I remember my dad taking me to see The Nutcracker,” says Stahl. “I was transfixed. We’d see it every Christmas after that.” On the other end of the cultural spectrum, Stahl and her dad would sit for hours watching Road Runner cartoons.

Asquith took his daughters to Vespers, where they learned to appreciate classical music. He read to his girls and taught photography to Stahl. He arranged flute lessons at the college for Twardowski, who today performs and gives lessons. “The last day I saw my father, I played two of his favorites,” she says: “Bach and the theme to The Pink Panther.”

From the ballet to cartoons, from Bach to The Pink Panther theme, Asquith embraced it all.

“How to describe my father? Definitely spiritual. He was omnipresent. He always came to our school performances. He was always a part of everything,” says Stahl. “The bench is my reminder that I had this family. It’s a memorial for dad, but for me it’s what we had in our little family back in the days of Moravian College. It’s my way of immortalizing all the good memories for all of us.”

Glenn made pastoral counseling a central component of ministerial education at the seminary. He urged his students to pay close attention to the "living human subject" and to learn from human experience rather than simply studying scripture and theology. In his classes and work with students, he always demonstrated the skill of active listening, helping students to reflect on their own experiences and emotions while engaged in counseling and ministry…. Those of us who had the privilege of studying with Glenn remember his genuine warmth and compassion as well as his scholarly acumen. He also had a lovely singing voice and loved to laugh. For years he and David Schattschneider [former dean of Moravian Theological Seminary] teamed up in a comedy routine called “Little Bunny Foo Foo” in which they gently highlighted the amusing side of seminary life. In short, Glenn Asquith exemplified the ideal of the teacher-scholar who was a mentor and friend to students. —Craig Atwood, Charles D. Couch Chair of Moravian Theology and director of the Center for Moravian Studies

Glenn is deeply missed. His steady presence, his sly sense of humor, his absolute belief in people, and his deep and unwavering faith made him a beacon for many people, myself included. As master of arts in pastoral counseling alumna Kelly Howard said to me right after Glenn’s death, “I am sure Glenn is already having conversations with his spiritual heroes Anton Boison and Henri Nouwen!” This brought a smile to my face then and continues to do so. Yes, the community of saints that Glenn is now surrounded by has deepened with his passing over into this other realm. —Marcella Kraybill-Greggo, director of spirituality programs

Where have all the workers gone?