Nicholas Azpeitia ’22 has had lots of people rooting for him at Moravian. The linebacker played all four seasons for the Greyhound football team. But the encouragement that means the most to him comes from the Bateson family whose endowed scholarship has helped fund Azpeitia’s Moravian University education.

“It’s made me feel like I had someone else in my corner,” says Azpeitia. “It makes me want to push harder in my academics. There’s another person out there cheering me on, another person I want to make proud.

Azpeita points out that the scholarship also has benefited his family, who have helped pay for his education. “And my family is what’s most important to me,” he says.

Born and raised in Tampa, Florida, Azpeita has four siblings. His dad is a policeman, and his mom is a veterinary technician. They are a close family for which Azpeita is grateful, knowing that many families suffer strained relationships.

So the question nearly everyone asks Azpeita is, why did he come all the way to Bethlehem, Pennsylvania, to attend college?

“I wanted great academics and to play football,” he answers.

And he wanted a Division III school. Azpeita graduated high school with about 1,000 other kids. Lots of his friends went to big state schools with 30,000 to 40,000 students. “I didn’t want that,” he says. “I wanted to go somewhere smaller, where I would feel like a person, not some student lost in the crowd.”

There are no Division III schools in Florida, so Azpeita looked to the north. When he came to Moravian, he says he got along easily with the people he met. It felt good. It felt like home. And with the Lehigh Valley International Airport just down the street, he could easily go home to visit his family, and they could easily fly to visit him in Bethlehem. It was perfect.

And it has been. Azpeita has enjoyed so many excellent experiences with the football team whether that’s been wins on the field, socializing off the field, or volunteering at a local elementary school. But he keeps coming back to the whole community. “The people are fantastic,” Azpeita, says. “It feels like there are no strangers. It feels like home.” 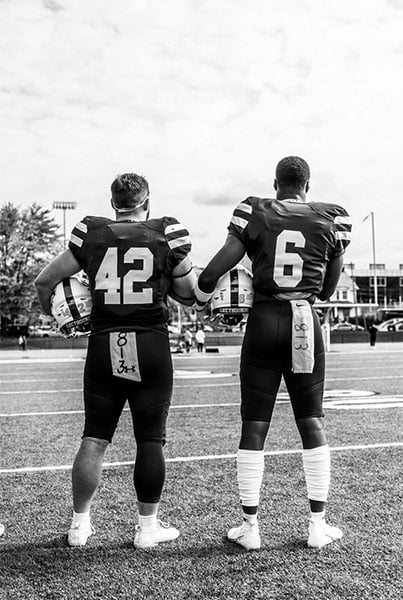 And a little piece of home is, in fact, with him. Azpeita’s roommate since sophomore year, Romello Walters (photo: left, Azpeita; right, Walters), grew up with Azpeita in Tampa. They went to middle school and high school together, and they played football both in Tampa and at Moravian. “Our parents are even good friends,” says Azpeita.

Azpeita will graduate this spring with a degree in business management on the organizational leadership track. It is a broad academic discipline that can take him down any number of career paths. The path this sports lover most wants to pursue is one that leads toward marketing professional athletes and their brand. “I’m not going to become a professional football player,” he says. “The next best thing is to work with the pros.” After graduating, Azpeita plans to return to Tampa and look for a position in sports management.

Academics, sports, activities...college is also a time of self-exploration. When asked what he has discovered about himself during his four years at Moravian, Azpeita gives a thought-filled pause and then says, “how to listen.”

“Not just sit in a classroom and pay attention but listen to other people and what they truly mean when they’re speaking to you,” he says. “With the pandemic and everybody wearing masks, you can’t see facial expressions, but you can still listen and observe body language. My best friend is a black man, and I listened to what he went through that I didn’t go through. I listened to professors and coaches and grew to understand what it takes to be in the real world, not just be a college kid. Really understanding what it means to listen and how to listen, that’s what I grew on, and I’ve become very good at it.”

Azpeita listened closely during his conversations with Todd E. Bateson ’86, who established the Bateson Family Scholarship Fund. “I asked Mr. Bateson why he does it—he doesn’t know the students who benefit from this fund or their background,” says Azpeita. “He said, there are people out there who need a hand but don’t know how to ask and then they tend to struggle. If you can give a hand to help someone, it’s important.

“This is something I want to do when I am successful,” adds Azpeita, “give back to students and the school that gave so much to me for four years. I want to see other people succeed.”