Life as a D3 Hooper

Across YouTube, Instagram, and TikTok, senior basketball player Danny Cooper gave followers a glimpse into the 2021–2022 Moravian men’s basketball season as only a player can show—grinding through tough workouts, enjoying locker room camaraderie, singing in the car with his teammates, savoring wins and game highlights.

For Cooper, sharing his experiences has been a way to motivate and inspire future college athletes while preserving the memories being made on and off the court. His love of the sport and gratitude 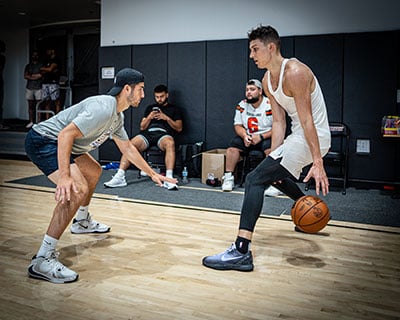 for the chance to play is apparent in every post. And while it stems from the appreciation for normalcy many of us have gained over the last two years, it also comes from the time Cooper spent away from the game.

Growing up, Cooper, a point guard, intended to play on a Division I college team. He even turned his devotion to the sport into a business venture during his junior year of high school when he started Danny Cooper Basketball, a training program for younger players.

“I was able to make money playing basketball and helping people, and those are my two favorite things,” he says. “When I was in high school, I was of the mindset that if I don’t go to a Division I school then I don’t want to play college basketball.”

But when offers only came from Division III schools, Cooper decided to attend Penn State and take his chances to be a walk-on player. By the end of his sophomore year, the opportunity to join the team hadn’t happened, and the COVID-19 pandemic landed him back home just as his younger sister was researching colleges where she could continue her basketball success.

Cooper realized how much he missed playing and pursued transferring to Moravian University after assistant men’s basketball coach Jimmy Murray ’19 (who attended Plymouth Whitemarsh High School in suburban Philadelphia where Cooper was a student) told him about Moravian’s “small school vibe and tight-knit community,” he explains. “I kind of took a leap of faith, and it’s the best decision I ever made, really.”

There’s a big misconception about the difference between playing for a Division I or Division III team and not a lot of information from the player’s perspective, Cooper says, so he decided to pick up his smart phone at the start of the season to create his “Life as a D3 Hooper” YouTube series.

“Part of my goal is to show a kid like my past self what Division III can look like and how it can be a really great, fruitful experience even if it isn’t Division I,” says Cooper, who is majoring in sports management.

Aiming to spread positivity and optimism—much like his entrepreneurial idol Gary Vaynerchuk, chairman of VaynerX, a modern-day media and communications holding company–Cooper says that if he can motivate just one player, his efforts will have been worth it. “In 20 years, I can look back and see myself, my journey,” he adds. “I think it’s going to be so cool that I can sit down with my kids and show them what I was like as a senior in college during my basketball season.”

As for what’s next, Cooper has two years of eligibility left to play at the college level, or he could go all-in on growing his basketball training business. Travel is also important, as Cooper says he takes any opportunity to explore and get out of his comfort zone, as well as network with other entrepreneurs from whom he can learn. “I’m a spontaneous person,” he says. “I like to go with the flow and see where my heart will lead me.”

Wherever he goes, Cooper will be sure to bring his online followers with him for the ride.