Erika Zarate ’22: “The Northern Triangle: Migration from Guatemala, Honduras, and El Salvador to the US” (seated left in the photo below) 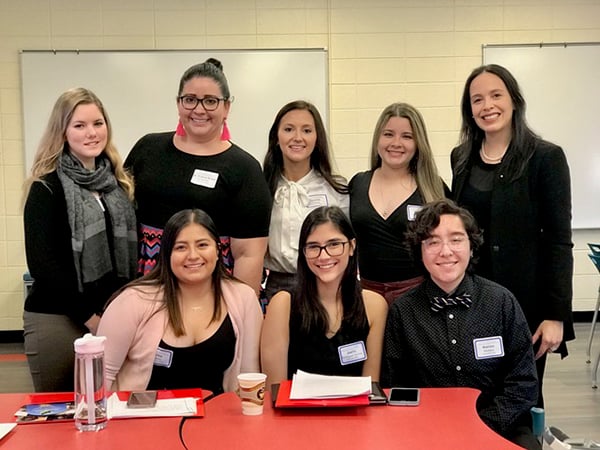 This year’s conference topic, “Cultural Issues in a Global Society,” brought together students from universities in the greater Philadelphia and New York areas to present their research on cultural issues in the United States Latinx community, Latin America, Spain, China, and Japan. The conference, which launched in 2016, was created to raise awareness of cultural diversity across the world and share research in a student-centered event. Presentations could be given in either English or Spanish.

“One of the goals that I most value at Moravian College is our commitment to support undergraduate research,” says Claudia Mesa, associate professor of Spanish, “And one of the most valuable experiences for students is to engage in dialogue with a community outside the classroom and to present their work to young scholars and experts in the field. Presenting their work to a broader audience, makes their participation in a conference even more meaningful because students realize that they are part of an intellectual community that is brought together out of common interests.”

The students’ confirmed the significant value of this conference to their academic development and pursuits.

“I presented a research paper on racism in Mexico. Mexico, my country of origin, boasts often about how it is exempt from racist rhetoric. Most citizens believe gender, age, and class impact their lives more than race. I sought to dismantle this idea. I challenged the belief by revealing the racial disparities in education and the work force, and I showed how, overall, the history of Mexico—colonization, racial castes, and so forth—is mingled with racism and colorism. I also gave insight to how Mexico as a country can help shrink these inequalities in various sectors.

“I’ve always thought of myself as a good presenter, and I’m glad the conference further challenged me to be an even better one. This was the first time I ever presented a paper and had to read from a written document, so I needed to speak more clearly than if I were talking extemporaneously. Also, I gave my presentation in Spanish, and though it is my first language, my Spanish fluency is a little rusty after years of speaking English.

“The modern language conference helped me realize just how much I love to research topics that I'm interested in and gave me ideas for future research and presentations. It helped me to learn more about opportunities outside of the classroom and provided an opportunity to engage with others on a more rigorous academic level. I confess that at first I was afraid to submit anything to the conference, but I'm glad I applied and was accepted.“

“One of the goals that I most value at Moravian College is our commitment to support undergraduate research.” —Claudia Mesa, associate professor of Spanish

“I presented my essay on the film Princesas (2005) by Spanish film director Fernando León de Aranoa. The film, set in Madrid, follows the lives of two women—one an illegal immigrant from the Dominican Republic and the other a Spanish native—who struggle to make ends meet working as prostitutes. Despite the initial barrier between the two, based on prejudices, they soon realize they share the same feelings of displacement and isolation. In my essay I analyze the cinematic techniques the director employs in order to film an authentic view of the lives of these women that are normally judged and silenced while living in the margin of society. The film offers an inside look at the daily struggles of prostitutes and undocumented immigrants by entering the most private spheres of their lives without judging them, thus defying stereotypes.

“My involvement in the conference has made me more comfortable to present at future events, and the experience has given me practical knowledge for presenting an essay to an audience. Sitting in on the other students' presentations was also very interesting as I was able to hear different viewpoints on some of the literary works that I had previously read.”

Mesa was the invited keynote speaker and presented her lecture “Picturing the Virgin Queen: Elizabeth I, Tudor in Early Modern Spanish Sources.”

Other attendees from Moravian College were Franca Roibal Fernandez, visiting assistant professor of Spanish, who chaired a panel and facilitated the discussion; Bernie Cantens, professor and chair of philosophy, who also chaired a panel and helped with the overall organization; and Christina Burnham ’21, who was interested to hear her peers’ presentations and support faculty as well.

“It was an incredible experience!” says Fernandez. “Intellectually stimulating and inspiring, and the students’ presentations were wonderful. We received compliments from the director of the conference, and the students were so proud.”

Alec Buttner ’21 Accepted to Doctoral Program at University of Chicago