What are grass shrimp and why do we care about them? Inside Moravian asked Josh Lord, assistant professor of biology. “Grass shrimp are one of the most common organisms in estuaries and coastal environments along the east coast of the United States, and they are an important food source for blue crabs and many fish species,” he explains. “They are even grown and sold as live fish food for aquaculture. Despite their abundance and role in the food web, we know very little about their habitat use and behavior, so several of my students have been exploring this.”

Each student looked at a different aspect of the lives of grass shrimp. Flickinger’s work examined the trends of aggression between grass shrimp and mummichog fish, which also inhabit the Atlantic estuaries and are a primary predator of grass shrimp. The hypothesis she explored was that size would play a major role in aggression, however, fish and shrimp size did not necessarily predict behavior. “Through this study, I identified unique trends of aggression,” says Flickinger, “indicating these two species have a complex predator-prey relationship.”

And on the topic of aggression, Popolla analyzed videos of 10 grass shrimp fighting each other in an arena with an artificial shelter. In the field, having access to shelter provides the added benefit of protection; therefore, in Popolla’s experiment, the artificial shelter was the optimal location. Grass shrimp fight to form a dominance hierarchy—one shrimp rules over the others—and this helps them as a group in the wild to be energy efficient, Popolla explains. Not surprisingly the shrimp with larger claws are more dominant than those with smaller claws.

Group dynamics was also central to DiSipio’s research. The goal of his study was to discover if grass shrimp behavior is affected by ocean acidification. DiSipio compared the behavior of shrimp in three situations:

2. Acidified seawater with a pH of 7.7 (arrived at by bubbling carbon dioxide into the water)

3. Acidified seawater with a pH of 7.7, where the shrimp remained for two weeks

DiSipio examined video footage of the shrimp behavior in those three trials. “The dominance hierarchies formed in the control and short-term trials but were weaker in the two-week trial when the shrimp were exposed to the lower pH over a longer time,” he says. “This suggests that climate change and the changing environment within the ocean could alter grass shrimp’s social behavior.”

For Disipio, Popolla, and Flickinger, attending the conference and presenting their research was a high point in their Moravian experience. They met researchers from all over the country, improved their presentation skills, absorbed new learning in marine ecology, enjoyed a little sight-seeing, and bonded in friendship. Here are their reflections.

“It was intimidating being one of the few undergraduate students at the conference, presenting to mostly graduate students and professionals in the field, however, I was so excited to share my research from this past semester. I met a lot of people from all over the country and had many meaningful conversations. Presenting my poster helped me to further develop my communication skills. I also had the opportunity to learn about many topics in marine science by attending several presentations and viewing other posters.

“Fabiana, Anthony, and I bonded during our time at the conference and gave each other a lot of support. We also had the opportunity to explore the area of Portsmouth, which is a historical and quaint town, and we drove across the bridge to Maine to see a lighthouse and walk the beach. We even explored some tidepools. I am truly thankful for all I learned throughout this entire experience.”

“During the first night, Fabiana and I went to the poster session where Samantha was presenting and discovered a rundown of information about marine biology that I could never have imagined. There were posters about what sharks eat, how otters respond to producing offspring at an older vs younger age, many posters about corals, and so much more. Fabiana and I walked around for about two hours and then kept Samantha company when the session was dying down.

“When the session ended, we helped Samantha take down her poster, and I asked the two of them to help me practice and give me feedback on my oral presentation for the next morning. It improved my wording and calmed some of my jitters.

“The next morning came with no delay. Presenting to a room full of marine biologists was very very nerve-racking. I was a little shy on the first slide, but then took control and became much more relaxed. Once I was done it felt amazing!” 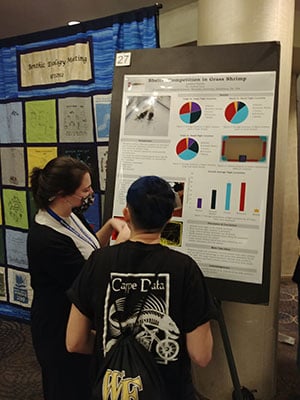 “Presenting my research at the Benthic Ecology Meeting Conference in New Hampshire was such an incredible experience and will most likely be my favorite memory of my time at Moravian. The three of us became close friends and came together as a team, and this really helped me relax and feel more comfortable. Standing next to my poster for three hours explaining it countless times allowed me to meet and interact with people who share my same interests. I was quite surprised at how large this conference was and how enthusiastic all the attendees were. The trip was a highlight of this semester, and the memories I have will never fail to make me smile.”