Teddy Smith didn’t think he would land a rare-books internship with Moravian University archivist Cory Dieterly. After all, he says he isn’t the most dexterous and was worried he might harm the first editions and other rare literary treasures in the Moravian collection. Smith, an English major with a minor in history, has ADHD and Asperger’s Syndrome and struggles with anxiety. Despite his apprehension he applied, and Dieterly accepted him. 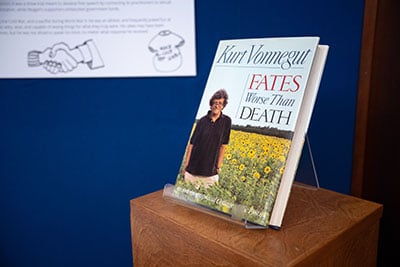 The semester-long internship involves choosing an author who is represented in the university’s rare books collection and building an exhibit and other experiences around that author. “I chose Kurt Vonnegut,” Smith says, noting the impact Cat’s Cradle had on him in high school. “I like humor in books, and Vonnegut is very famous for his dark humor.”

Smith created an online Kurt Vonnegut research guide, put together an exhibit featuring the author’s works, and hosted a screening of Stuck in Time, a documentary about Vonnegut.

and signed copies of Fates Worse Than Death and Hocus Pocus, all of which Smith has read. Coincidentally, this year marks the 30th anniversary of the talk Vonnegut gave at Moravian.

Throughout the internship, Smith delved into the works and life of Vonnegut. “He is a very enigmatic individual,” Smith says. “He had some interesting views of the world, and I agree with quite a few of them. I think he was a good person.” 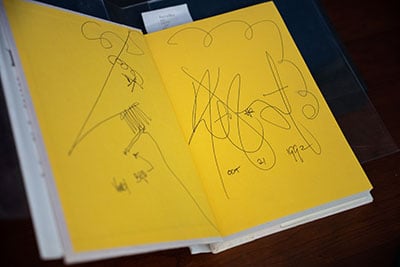 think was possible. “Moravian is a great place to be for someone like me,” he says. “It’s a small campus that’s relatively quiet with few distractions in the library. And I didn’t realize it before, but having experience in writing can take you places. How are you supposed to get far in life if you can’t write?”

Next fall, Smith, who does not like to speak publicly, will take a public speaking course.

“Take it from me, someone who has Asperger’s, autism, ADHD, you can do it,” he says. “You have to step out of your comfort zone.”

And what would Vonnegut say to that?

Smith recites a line from Vonnegut’s 1992 speech at Moravian: “Life is farting around, don’t let them cheat you out of it.”